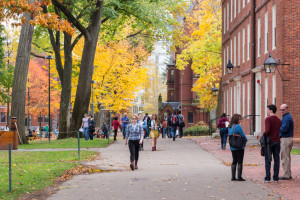 On Thursday, in a speech by U.S. Department of Education Secretary Betsy Devos, the Department announced that it would undertake a review of its current…
END_OF_DOCUMENT_TOKEN_TO_BE_REPLACED Cara Munn was a 15-year-old student who participated in a school-sponsored trip to China in 2007.  The itinerary for this trip included a visit to Mount Pan, located in a forested region of northeast China.  Upon descending the mountain on foot, the student suffered several insect bites, and ten days later, began to experience symptoms of tick-borne encephalitis.  Though her condition subsequently stabilized, the student suffered permanent brain damage and has lost the ability to speak and has limited control of her facial muscles.  The student and her family sued the school for negligence. Following a 2013 jury trial, a federal district court in Bridgeport found the school negligent for failing to warn the student and her parents about the remote possibility of insect-borne diseases and ordered the school to pay $41.5 million in damages—$31.5 million of which was for non-economic damages such as pain and suffering.  The school appealed.  In August 2015, the Second Circuit found that the student’s injuries were foreseeable; however, the court requested guidance from the Connecticut Supreme Court on two specific issues:  1) whether state public policy imposed a legal duty on schools “to warn or protect against the foreseeable risk of a serious insect-borne disease when organizing a trip abroad and, if so, 2) whether the jury’s damages award, particularly the noneconomic portion, warranted [vacation of or reduction in the jury’s damages award].”…
END_OF_DOCUMENT_TOKEN_TO_BE_REPLACED On January 30, 2017, the Connecticut State Department of Education (“CSDE”) released a memorandum titled, “Guidance for Districts Regarding Refugee Students,” in response to an Executive Order signed on January 27, 2017, restricting immigration into the United States.  The CSDE memorandum reaffirmed the obligation of public schools to provide children with an education regardless of their race, color, national origin, citizenship, immigration status, or the status of their parents.
END_OF_DOCUMENT_TOKEN_TO_BE_REPLACED END_OF_DOCUMENT_TOKEN_TO_BE_REPLACED

For those of you in Fairfield County, we are pleased to offer this seminar in our Stamford Office. Join Shipman & Goodwin attorneys Thomas B.
END_OF_DOCUMENT_TOKEN_TO_BE_REPLACED

Join attorneys Gary R. Brochu and Jessica L. Ritter for a timely presentation for board of education members. This workshop is intended to provide a…
END_OF_DOCUMENT_TOKEN_TO_BE_REPLACED In defense, the school district filed a Motion to Dismiss arguing that the evidence proffered by the plaintiff was insufficient to establish a claim of sex discrimination.  In challenging the school district’s argument, the Government argued that Title IX provides protection for transgender students.  More specifically, the Government asserted that “[u]nder Title IX and the Equal Protection Clause, discrimination based on a person’s non-conformity to sex stereotypes, a person’s gender identity, or a person’s transgender status constitutes [sic] discrimination based on sex.”…
END_OF_DOCUMENT_TOKEN_TO_BE_REPLACED

In a recent court ruling, Judge Garvan Murthai of the Vermont District Court allowed a parent’s First Amendment claims to go forward to trial after the Superintendent banned the parent, whose child was eligible for special education and related services, from all school grounds, including banning the parent from board of education meetings. The school district banned the parent after he had made harassing and threatening statements to school staff and committed acts that frightened school staff. The parent allegedly drove past his child’s teacher’s house in another state, banged his fists on tables during meetings, randomly drove by the school when it was not in session and honked the horn when he knew that the school’s principal was the only person in the building, and shouted loudly at school staff on a continual basis. The parent also filed several complaints against the school district, put up signs and handed out flyers at board meetings. Additionally, the parent made threatening and potentially violent statements in online forums about the school and school staff.

In its ruling allowing the case to go to trial, the court found that the parent had no First Amendment right of access to school buildings and that school board meetings were limited public fora. Accordingly, the judge held that the limits on the parent’s speech by banning him from school property were “collateral consequences” of his own potentially dangerous actions and that his right of access was not implicated because the school district did not ban him based on his speech. …
END_OF_DOCUMENT_TOKEN_TO_BE_REPLACED